What is a Watershed?

A watershed is the area of land that provides contributes water to particular river or stream. This can be runoff from groundwater (springs) or precipitation (rainfall, snow, fog, etc.) Think of the area between two ridgetops–if a raindrop falls on one side of the ridge, it flows one direction that eventually ends up joining other water to flow into the nearby river or stream. 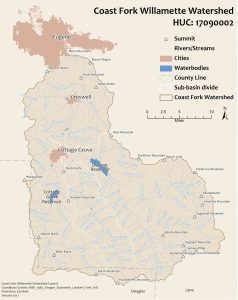 The highest elevation in the watershed is 5,928 feet (1,807 meters) at Fairview Peak, while the elevation of the Coast Fork Willamette River floodplain is approximately 450 feet.

The Coast Fork Willamette River basin is located at a boundary between the lowlands of the Willamette Valley and the mountainous landscapes of the Cascade and Coastal Mountains and between the hardwood-rich forests of the Umpqua Valley and the conifer-dominated forests of the Willamette Valley. The contrasting geology and stream flows of the volcanically derived soils of the Cascade Mountains to the East and the seafloor soils of the Coast Range to the West add another layer of dynamism to this rich landscape. Human land use, from forestry to farming, to urban development adds another level of complexity to the mosaic of habitats found in this region. For these reasons, one encounters a diverse set of habitat types as they journey from ridgetop to valley bottom in the Southern Willamette Valley.